When done properly and on carefully selected patients, these procedures can produce dramatic and positive enhancements. But in the past they were often over used and some times poorly performed by inexperienced surgeons.

This resulted in some patients getting minimal long term benefits or worse becoming disfigured or in chronic pain. These complications, due largely to poor patient selection and inexperienced surgeons, have led to a decline in the popularity of these major scalp surgeries.

Yet in the hands of a highly experienced surgeon, the right candidate can achieve dramatic improvement. Generally the best candidates for major scalp surgeries are patients with very elastic scalp and good donor density.

The most popular surgical procedure for reducing the balding area is Scalp Reduction Surgery. This procedure basically cuts out some or all of a patient’s bald spot. For the right patient and in the right hands, this procedure can produce a dramatic improvement in a short period of time.

For the right candidate - a potential dramatic reduction in baldness.

The below patient was told that as a “Class 7” he was too bald to successfully complete hair restoration surgery. However, he had very thick hair density in his bald resistant donor area and very elastic scalp skin. These characteristics made him an excellent candidate for scalp reduction. 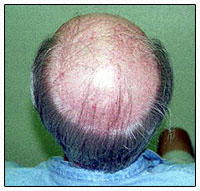 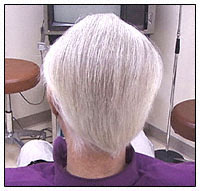 This patient underwent two very successful scalp (alopecia) reduction surgeries. He was able to eliminate his bald spot in the crown (back of the head) with out any grafting being required. His remaining available donor hair was then used to reestablish his hairline and mid scalp regions.

The potential “down side” of Scalp Reductions.

While a scalp reduction can produce an immediate decrease in the size of a bald spot it is not without drawbacks.

For some patients their skin stretches back over time and the bald spot again grows larger.

Also since the scalp on the sides and back has been pulled up tighter the elasticity (looseness) of the skin in the donor area is typically reduced, as is the hair density. So while the hair on the sides (the lateral hump) has been elevated and less grafts are required to fill in the remaining bald area, there is a reduction in the amount of donor tissue and hair that a surgeon can safely remove from the sides of the donor area.

However, if the patient chooses to do a hair transplant, the posterior donor area remains very available as the elasticity is not effected in this area. This is especially true of the mid-line reduction which also has the least impact on circulation and sensation.

When undue tension is used in the suturing of the incision, scalp reductions can produce large visible scars in the top of a patients head. The scalp can also be painful even weeks or months after the procedure. If the occipital nerve is damaged a permanent numbness can develop.

In addition, patients may develop a “slot deformity”, which is an unnatural appearing indentation along the scar or they may develop a slot defect which is an abnormal hair direction. With a slot defect the hair tends to be perpendicular to the incision and appears as a permanent part. This defect has been also described as a “parting of the seas”.

By using galeal or anchoring sutures the indentation can be avoided. A physician who does a reduction should know how to correct the hair direction by using a technique developed by Dr. Patrick Frechet of Paris, France.

Who may be a candidate for Scalp Reduction Surgery?

Only patients with very loose skin in their balding area should be considered for this procedure. A measuring technique can be utilized to demonstrate how much tissue can be removed even before such a procedure is contemplated. By doing so the benefits can more accurately be weighed against the risks.

Scalp flap surgery relocates an entire strip of bald resistant scalp intact from the side of the head to the frontal hairline area. This is a five step procedure.

First an incision is made along the upper margin of the intended flap. Then an expansion balloon is placed under the scalp tissue and the wound is sutured closed. For the next three or four weeks saline solution is injected into the balloon to stretch the tissue.

Second, when the tissue expansion is accomplished the patient returns for a delay procedure. An incision is made which becomes the upper two thirds of the flaps and then is sutured back in place to induce collateral circulation.

Third, about a week later a similar procedure is performed on the lower third of the flap and it is elevated and then sutured back in place.

The fourth step of this relocation process is for a strip of hair-bearing scalp near the bald area to be surgically excised from the side of the head. However, a small area of about 2 inches at one end is left attached to the scalp to allow continued blood flow in to that piece of skin and hair. This results in a bulge of tissue or a “dog ear” at the base of the flap due to the twisting of the tissue to its new location at the front of the hairline.

Fifth about one week later, the dog ear is removed.

This procedure produces dramatic and dense results in the hairline area. However, there are numerous drawbacks to this procedure.

The “down side” of Scalp Flap Surgeries.

One of the more obvious problems with scalp flaps is that the angle of the hair at the hairline is reversed. Normally a person’s hair will angle forward. But after a flap procedure a patient’s hair will angle backwards. This produces an unnatural appearance.

Typically micrografts are placed in front of this thick strip of hair to soften its abrupt appearance and to hide the scar. However, this often does not remedy the odd direction of the hair and often does not sufficiently mask the scar.

An even worse scenario can result if the flap tissues dies, thus producing a very unsightly scar There have also been occasions when the donor scar has stretched leaving a wide 1.5 to 2 inch scar along the side of the head where the flap was removed.

A scalp lift is a very invasive surgery developed by Dr. Dominic Brandy in which a patient’s scalp in large part is separated from their head and then lifted upwards. By separating the scalp from the underlying muscles and supporting tissues in a process called “undermining” more hair bearing scalp can ultimately be pulled upward into the balding area. Balding skin is then excised from the top of the head and the sides and back of the head are pulled upward and then sutured together. The procedure dictates that both the occipital nerve and arteries are ligated (tied off).

This major 2 to 3 hour surgical procedure can produce a dramatic reduction in the bald area. However, due to the considerable “undermining” of the scalp during this procedure a patient usually experiences permanent scalp numbness and prolonged discomfort.

Other potential complications can occur such as excessive elevation of the hairline over the ears and base of the neck, and scar lines through or in front of the side burns. If any baldness remains in the central area of the scalp, grafting is less effective due to the compromised circulation in this area. Dr. Brandy himself has discontinued the use of this procedure.

A scalp expansion is similar to a scalp reduction. But with this procedure the scalp is stretched over a period of weeks before the bald scalp tissue is surgically removed. This stretching results in increased elasticity of the scalp and the ability to remove more balding scalp.

In the scalp expansion procedure a silicone balloon is surgically inserted under the scalp. Over the next four to twelve weeks the balloon is injected and expanded with saline injections. This stretches the scalp enabling the surgeon to eventually remove larger areas of loose bald scalp.

This expansion procedure works because when skin is under constant pressure the existing skin cells start to grow newer skin cells. This allows the skin time to adjust and expand under the applied force.

The scalp expansion procedure requires two surgeries – one for inserting the expanding balloon and the second for its removal along with the excess loose bald skin.

Scalp expansion is risky and has drawbacks, including having an oddly shaped head for weeks due to the balloons under the scalps surface. There is a higher risk of infection and discomfort as well.

During a scalp extension a device is placed underneath the scalp’s surface during the first scalp reduction procedure. This device has two rows of hooks that are connected by broad-based elastic bands.

The device’s elastic bands stretch and loosen the patient’s scalp. This is caused by the gentle and constant upward pull of the hair-bearing tissues. These effects last for about one month and the procedure can be repeated. However, the patient’s scalp may appear buckled during this stretching process.

Ultimately the device is removed along with the excess loose bald scalp. The procedure has resulted in newly expanded skin, which covers the formerly bald area.

Complications with this procedure include increased risk of infection since the device remains under the scalp for 29 days, a constant discomfort during this time period, frequent seroma formation, and a more friable scalp tissue. It should also be noted that this device is not approved by the FDA.

Special thanks to Dr. Daniel Didocha for contributing to the development of this scalp surgery section. Dr. Didocha is widely known as one of the few surgeons in the world with the expertise and experience to successfully perform major scalp surgeries.

What is the Best Hair Restoration Procedure?

Medical hair restoration - is it right for you?

How Much is a Hair Transplant?

How to Choose a Hair Restoration Clinic.

Hairline Lowering Procedures for Women with a High Forehead

How to Pick a Hair Restoration Physician