Before and after hair transplant photos show how dramatically a person can change. But what happens between surgery and before we see these dramatic results?

The below hair transplant patient volunteered to document his progress from start to finish over 18 months. 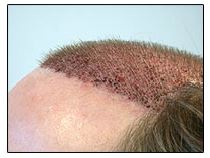 David investigated hair restoration surgery for eight years. After numerous "consults" he remained highly skeptical until seeing actual patients up close. He also used the Internet to do extensive research.

In February of 2002 he took the plunge and did 3,000 all follicular unit grafts. As you can imagine from his photos at age 37, he is absolutely delighted with his life changing results.

One day after surgery

Immediately after surgery the scalp is typically pink with tiny scabs forming around the incisions. The hundreds of tiny graft incisions will heal rapidly within a week to 10 days.

The hundreds of short hairs were relocated with their follicles from the bald resistant donor area. These new hairs typically shed between 10 days to four weeks, leaving the hair follicles to take root and grow.

For the next few days, David experienced the typical soreness and tightness in the donor area in the back of the head, with numbness in the newly grafted area.

The redness and tiny scabs in the grafts recipient area typically clear up and fade away during the first week, as they did for David. Most patients feel comfortable returning to work without wearing a cap after a week to 10 days.

The numbness in the newly grafted area is typically gone after about a week. However, the numbness and tightness in the donor area may take a few weeks before fading away.

Surgeons typically use either staples or stitches to suture the donor area closed.

At about 10 days they are removed.

The hair immediately in and around the now healed donor incision will grow out and typically hide any visible signs of scarring. 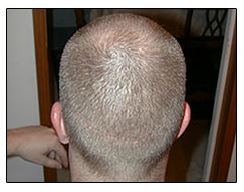 David volunteered to shave his head to show his donor "scar" two months after his surgery.

The donor scar is typically undetectable, even upon close examination, when the hair is longer than stubble.

It's normal for a patient to wait 3 to 5 months before beginning to see any new hair growth.

These new hairs are initially thin and wispy.

Typically from 4 to 7 months a patient will continue to see new hair growth as the transplanted hair follicles begin growing new hair.

These new hairs will grow thinker and fuller as they continue growing during the first year. 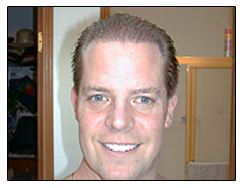 While these new hairs will continue to grow in diameter for the next few months creating an even fuller and thicker appearance.

Fourteen months after his first surgery David buzz cut his donor area to show that the "donor scar" has been a complete non issue for him.

Typically any donor scar is easily concealed with even short hair.

18 months after 2 surgeries - A second crop of new hair

Although David had a great result from his first surgery, he did a second procedure of 2,2000 grafts 14 months after his first procedure. His goal was to add density and fullness in the back crown area in particular. His second procedure, like his first, was painless and trouble free.

Only four months after David's second procedure he was already growing visible new hair. As this procedure continues to grow and thicken he will gain even more density and fullness.

These blogs contain photos journals documenting the person's hair restoration. Often you can correspond with these blog authors by email.

What is the Best Hair Restoration Procedure?

Medical hair restoration - is it right for you?

How Much is a Hair Transplant?

How to Choose a Hair Restoration Clinic.

Hairline Lowering Procedures for Women with a High Forehead

How to Pick a Hair Restoration Physician