The unique donor harvesting method of extracting follicular units one by one that accompanies follicular unit extraction (FUE hair transplant surgery) is what distinguishes itself from follicular unit strip surgery (FUSS). It's also considered by many to be the most vital part of the FUE procedure in cultivating viable grafts and maximizing hair growth yield. Historically, the higher rates of transection associated with follicular unit graft removal in FUE procedures led to lower yields and poorer outcomes. Thus, world renowned FUE practitioners have dedicated a lot of time and energy into improving and innovating tools and techniques related to the extraction part of the procedure. For a comprehensive discussion of extraction devices, visit "FUE Hair Transplant: Manual versus Motorized Extraction Devices".

While safe follicular extraction is critical and requires a lot of experience, dedication and time; donor harvesting only makes up approximately 50% of the FUE hair transplant procedure. What happens to the grafts outside of the body is just as crucial to maximizing hair growth as removing them from the scalp.

Because graft implantation can greatly affect the yield and final appearance of the overall result, it is important to understand today's methods of implantation and commonly used devices. Several of these methods are used during both FUE and FUSS (strip surgery).

Generally, the placement of grafts in FUE procedures can be performed two different ways:

During this method, tiny sites or incisions are pre-made with small blades or needles in the balding areas of the scalp, referred to as the recipient area. While the FUE physician is making recipient incisions, follicular units previously harvested sit in a standard storage solution (typically saline) to prevent dehydration and damage to the follicles. Follicular units are then carefully placed into tiny recipient sites by either the FUE doctor, experienced technicians or both.

Physicians may or may not chose to inspect and/or trim FUE grafts further under microscopic dissection before implantation.

This implantation method is very common and used in both FUE hair transplant surgery and strip surgery (FUSS).

During this implantation method, site creation and graft implantation are performed simultaneously as part of a one or two step process.

Two Step "Stick and Place" Technique: The two step "stick and place" technique describes the process in which a qualified physician and/or a technician makes a recipient site incision with a needle or blade and then immediately places the follicular unit graft into the incision using forceps or another similar device.

One Step "Stick and Place" Technique: The one step "stick and place" technique describes the process in which a qualified physician and/or technician uses a single device, called an "implanter pen" to make both a recipient site and implant the follicular unit almost simultaneously. While this "stick and place" technique is considered only one step, a preliminary step is required to pre-load each implanter pen prior to implantation. This takes additional time and energy and requires additional experience and skill. 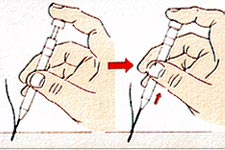 What is an "Implanter Pen"?

An "implanter pen" is a pen-like device featuring a hollow needle attached to a tube-plunger apparatus. During graft placement with the implanter pen, the hair restoration physician and/or technicians first load several extracted follicular units into implanter pens. This is accomplished by grasping the upper portion of the graft (epithelial region/infundibulum) with forceps, gently placing it into the hollow needle (at the end of the implanter) and handing the loaded pen back to the physician. Next, the surgeon implements the one step "stick and place" technique by inserting the sharp needle at an appropriate angle in the scalp (making the incision site) and implanting the graft by pressing down on the plunger. Currently, there are several different types of implanter pen devices used in FUE procedures. All of them work very similarly to the above with some distinct advantages and disadvantages. For a more detailed discussion of some of the most popular implanter pen devices, see below. 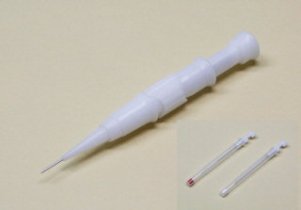 The Choi Implanter is generally considered the “original” implanter pen device, and originated from the Kyungpook National University (KNU) in Korea. The idea behind this first implanter device was simple: to combine the act of making recipient incisions and implanting follicular units.

Normally, anywhere from 2-6 Choi implanters are used concurrently during a procedure, and the device comes in a variety of needle sizes to fit single, double, and triple follicular unit grafts.

According to some hair restoration experts, there are distinct advantages and disadvantages to the Choi Implanter device. Advantages include adequate survival rates, decreased bleeding during recipient site creation and reduced trauma during graft handling since the lower regions of the follicle containing the crucial hair bulge and derma papilla aren't touched while loading the pens or during implantation. Also, since Choi implanter pens simultaneously create recipient incisions and place grafts, the overall time of the FUE hair transplant procedure may be reduced with an experienced and adequate team.

Disadvantages include increased training time for the physician and staff members, more expensive procedures, lack of depth control when creating incisions, and reports of needles attached to the pen dulling prematurely during the procedure. Another disadvantage is that the Choi implanter pen uses larger needles as big as 1.1mm in diameter. Moreover, because the hair in the donor region is usually only trimmed to 1 or 2 cm in length which is an optimal length for the pen, extraction may be more difficult and increase the risk of transection.

Some physicians find greater success rates when performing FUE hair restoration with the Choi Implanter on Asian patients compared to patients of other races. Experts researched this phenomenon and came to the following conclusion: Asian hair shaft diameter is generally thick and straight, and the curly characteristics and thinner diameter of other races is difficult to properly load into the implanter and place in the scalp. This can lead to inappropriate graft bending, incorrect graft placement, and excessive trauma to the graft. Thus, most likely, not all patients are ideal candidates for use of the Choi implanter pen during surgery. However, other physicians disagree with this assessment, and believe training and experience with the Choi Implanter pen allows for effective graft placement with any type of hair characteristics.

First, the Lion Implanter features a “clip” that allows for faster and easier needle replacement. This decreases surgical downtime and encourages technicians to change needles when necessary. One disadvantage of implanter pens is excessive scalp trauma from needle dulling, so the ability to change needles quickly and easily helps promote fast, effective needle substitution when appropriate.

The Lion Implanter also features several upgrades to the needles themselves. According to Hans Biomedical, the Lion Implanter needles are sharper (to reduce scalp trauma during insertion), made from smooth alloy that reduces pulling and trauma to the scalp during insertion, and feature a wider, more hollowed core, which creates more room for the loaded follicular unit graft. The Lion Implanter needles are also sterilized with Ethylene Oxide gas and sealed in a double-layered blister package. This allegedly reduces contamination and subsequent chances of infection. The Lion needles also feature markings that help the orient the surgeon and ensure the grafts are placed in the correct position.

Despite these upgrades, the Lion Implanter is very similar to the Choi Implanter, and possesses similar advantages and disadvantages. However, many FUE experts, including Dr. Michael Vories and Dr. Jose Lorenzo, use the Lion Implanter, and believe it aids in promoting excellent results. Dr. Vories states that he began his FUE practice using the traditional pre-made incision method, but quickly changed to the Lion Implanter after researching the tool. After switching, he saw an increase in the final yield and aesthetic appearance of his FUE results, and now uses the Lion Implanter exclusively.

Because there is no standardized method of follicular unit excision, world renowned hair transplant surgeons use various cutting edge techniques and tools, all with excellent results. Ultimately, the skill and experience of the operating surgeon and their staff is more important than which method and tool they choose to employ.

Even the most advanced tools and cutting-edge methods can create poor results in the hands of an inexperienced surgeon. Moreover, with dedication, practice, and skill, talented hair restoration physicians are able to master the use of specific tools and techniques to create excellent results. Implantation with the Choi or Lion devices, much like the traditional forceps-assisted method, can produce impressive results when utilized by a trained surgeon who is familiar with each technique. However, because the implantation phase is such an important aspect of an FUE procedure, it is important for patients to understand the different methods of implantation and thoroughly discuss this information with their physician before undergoing hair transplant surgery. By discussing the surgeon’s choice of implantation method and understanding the philosophy behind it, patients can make informed decisions and achieve impressive FUE results.

What is Direct Hair Implantation (DHI)?