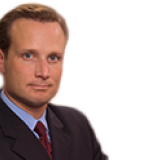 Dr. Jerry Cooley and his staff were early adapters of using microscopes to do excellent all follicular unit hair transplantation.

Dr. Jerry Cooley has an excellent reputation among his peers as one of the premiere surgeons doing follicular unit transplantation. He uses all the latest hair transplant techniques including FUE - Follicular Unit Excision (formerly known as Follicular Unit Extraction), ACell, FUSS (follicular unit strip surgery) and Hair Duplication formerly called "autocloning" for those who are appropriate candidates.

View highlights of our visit to Dr Cooley's clinic .

Dr. Cooley is a board certified dermatologist and diplomate of the American Board of Hair Restoration Surgery (ABHRS). He has served as Vice President of the International Society of Hair Restoration Surgery (ISHRS) and its President in 2011. In 2008, he won the coveted Platinum Follicle Award from the ISHRS for his many scientific contributions to hair restoration. He is a frequent lecturer at hair transplantation conferences, and has authored numerous articles and textbook chapters in the field.

Dr. Jerry Cooley is committed to researching improvements in the field of hair restoration and has received three research grants from the ISHRS. Dr. Cooley served as head U.S. consultant for Intercytex, Ltd., a British company which attempted to develop a “hair cloning” treatment for hair loss. He continues this research with leading academic researchers and biotech companies and has been featured in numerous media outlets, including the New York Times, The New Yorker and Wired magazines.

Dr. Cooley has conducted important studies demonstrating the importance of using microscopic dissection in creating grafts during FUSS. He is also well known for his laboratory research on hair cloning.

Dr. Jerry Cooley's academic credentials are particularly notable with a medical internship at John Hopkins and a dermatology residency at the University of Maryland where he served as chief resident. While in Baltimore he also trained extensively with Coalition member Dr. James Vogel, a well recognized plastic surgeon from Johns Hopkins.

Dr. Cooley is an active member of the International Society of Hair Restoration Surgery (ISHRS), the world’s largest organization of hair restoration surgeons. He has also served on the scientific and Internet committees for the ISHRS and was named Surgeon of the Month by the Hair Transplant Forum for his contributions to the field.

Dr. Jerry Cooley is the winner of the 2008 ISHRS Platinum Follicle award.  To learn more about his outstanding achievements as it relates to scientific research in hair restoration, visit “Highlights of the Annual 2008 ISHRS Scientific Meeting in Montreal”. Those who are in his area can go to him knowing that they are going to get quality work that is first rate by national and international standards. He takes a holistic approach to hair restoration and also prescribes non surgical medications like Propecia when appropriate.

For anyone looking for an outstanding hair transplant surgeon in the Carolinas and beyond, we highly recommend consulting with Dr. Jerry Cooley. 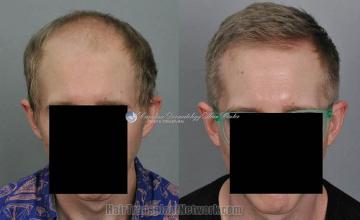 Hair transplant procedure before and after result photos with 3618 grafts 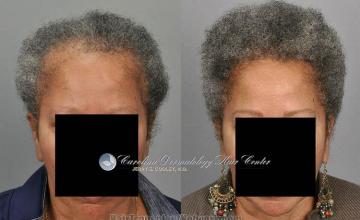 Hair transplant procedure before and after result photos with 2084 grafts 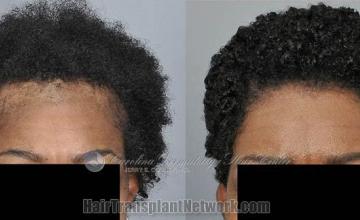 Female hair transplantion surgery before and after photographs with 3514 grafts

This patient is in his early 40’s and wanted to restore his frontal hairline. He had been taking finasteride for some…

This patient is in his early 30s and wanted to correct his frontal hairline and temple recession. He did not have any…