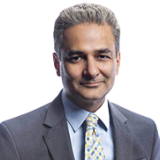 Caused stress and threatened to hold me back in my career.

I would recommend strip surgery.

In every way possible. Made me look young and attractive, gave me more confidence, and helped my career.

It's worth the money. Go for it. And strip surgery is much more affordable than FUE. Don't be afraid of the scar. My hair has covered the scar completely, and I'd much rather have a hidden scar and great hair, than no scar and a receded hairline. I would recommend Dr. Parsa Mohebi at US Hair Restoration. He's great at helping to plan a natural looking hairline, and his staff gives you a really enjoyable experience on the day of surgery.