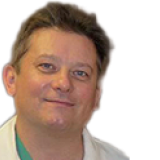 This 33 year old gentleman had a hair loss pattern similar to a class 5. After establishing his medical history and understanding the progression of his hair loss, I diagnosed his condition as Androgenetic Alopecia (male pattern baldness), ruling out any other possible dermatological or medical conditions which can cause hair loss. The patient’s goal was to get as much coverage as possible while maintaining a natural hairline. I explained to him that he was going to need two sessions to reach his goal. However, after one procedure he would have a dramatic change; a natural hairline and good density into the frontal ? of his scalp. When reconstructing the hairline I kept in mind what would be suitable for him now as well as something that will look good as he gets older; a key part of making the hairline look natural.
A total of 4,428 grafts were used. The break down was as follows: 1,398 single hair grafts and 3,030 two hair grafts. I used significantly more single hair follicular units which also allowed me to create a very natural hairline; an action that will allow him to comb his hair back without anyone detecting that he has had anything done.
These are the results of this FIRST procedure 9 months post-op. There will continue to be more improvement over the next few months. The patient is extremely happy with the results of his initial procedure and is planning on having a second procedure completed sometime next year.

Occurs when the connecting bridge of hair disappears leaving a single large bald area on the front and top of the scalp. The hair on the sides of the scalp remains relatively high.